In the spirit of our big sibling, Farm Aid, we’re pleased to introduce a new column celebrating that classic duo, music and food. Sound Bites, by HOMEGROWN member Toni Tiemann, surveys what up-and-coming bands are cooking, eating, and drooling over. Got a group to recommend? Shoot Toni a note! 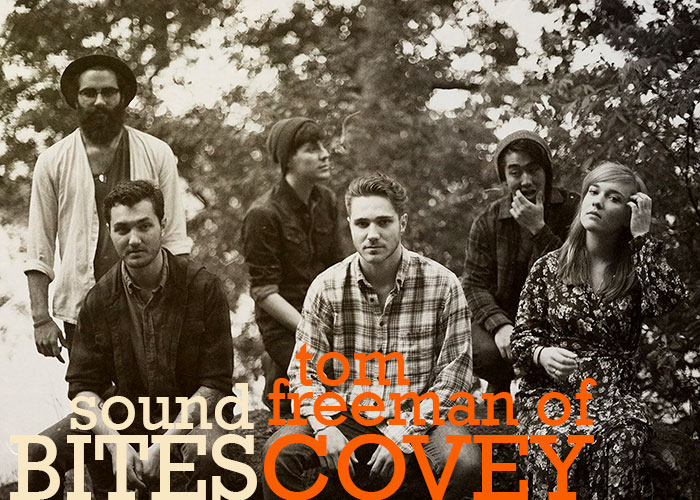 Different folks have different associations with the word “covey.” Bird watchers think of it as a flock, typically of partridges. Then there’s Stephen Covey, author of The Seven Habits of Highly Effective People. And SAT preppers can rattle off synonyms: a gang, a group, a party, a band. Here in Boston, it’s most definitely known as the latter—with a capital C.

The five-piece indie-folk band Covey was formed in 2013 by students at the Berklee College of Music. In its first year, the group collected all kinds of accolades, from The Deli’s New England Band of the Month to Bostinno’s Song of the Week for frontman Tom Freeman’s cover of Drake’s “Hold On, We’re Going Home.”

Freeman, who hails from England, is more than just a sultry voice and accomplished guitar player. He’s also a bonafide foodie and health nut. HOMEGROWN.org got a chance to catch up with him recently about how he eats on the road, the book that changed his diet, and what goes into his recipe for “chicken spins.”

HOMEGROWN.org: What will you hand out to trick-or-treaters this year?

Tom Freeman: Well, I want to be the person that gives out healthy food. I’ll give them a Lara Bar and disappoint all of the kids. (Laughs.) I only started eating them this year. I got our drummer into them. I actually saw them for the first time in a book called Eat This, Not That. It said that Lara Bars are some of the best simple-ingredient kinds of bars. No, I’ll give [trick-or-treaters] Mike and Ike’s.

What else did you learn from Eat This, Not That?

It’s a really cool book. It tells you what to avoid and what to eat. They recommend substitute dishes for the ones you already like. I keep it in the kitchen so every time we’re about to go grocery shopping, we take a quick look at it.

Did the book change your eating habits?

I actually changed my eating habits before I got that book. I was eating really unhealthy when I started college. I was like, “You know what? I’ll just be healthy.” I kind of took it overboard. I try to only eat things that come out of the ground. I won’t eat a lot of bread. I won’t eat pasta. I started eating like that and I feel happier.

What’s one home-cooked meal you can’t live without?

If you mean taste-wise, I’d probably say lasagna. I’d be sad if that was never in my life.

But you don’t eat that anymore!

How did you learn how to cook?

I wanted to be a chef before I started getting into music, but I wasn’t very good. I liked the idea of being a chef more than I actually liked cooking. I’m pretty impatient. So when I came to college, I started looking up recipes online and having a bit of fun with it. I learned through experimenting, really.

What are some of your favorite things to cook now?

I have this thing I always cook. It’s chicken, spinach, broccoli, and sweet potato, all cooked in the same pan, and I put pesto in and a bunch of garlic seasoning. I call it chicken spins. It probably has a proper name, but I don’t know what it is. I eat that almost every day. It’s really lean and really tasty.

What do you like to eat before a show?

Beef jerky for me. I love beef jerky. But it’s hard when you’re on the road. We went to a show last weekend. That was probably the worst I’ve eaten. I had burgers for every meal. Oh, I hated myself after that. You know when you’re on a roll with eating terrible? You just move slowly. That was me.

Do you have any tips for eating healthfully on the road?

Keep it simple and don’t be greedy. Know that you don’t need to be stuffed full all the time.

What’s the first thing you want to eat after getting back from a tour?

Since Tom cooks off-recipe, he recommends experimenting with the amounts of ingredients below.

» Almond meal (You can buy almond meal, you can blend plain almonds in a food processor, or you can substitute whole wheat bread crumbs.)

1. Put all of the ingredients in a pan, with the exception of the pesto and the almond meal.

2. Pour some olive oil on top of everything. Add more if needed.

3. Turn the heat to medium and cover your pan with a lid to keep all of the moisture in. Keep an eye on it and give it all a stir about every 5 minutes.

4. WARNING: It might not look like it, but I swear it tastes good and is good for you. After your chicken is cooked (I check by cutting a tenderloin in half to make sure the middle is white, not pink), add the pesto and mix it in. Then add a generous amount of the almond meal, making sure you cover most of the dish.

5. Mix it all together. Let it sit for a little while longer, with the stove turned off. It should resemble the texture of stuffing. Actually, chicken spins makes a great replacement for stuffing—a filling, tasty, and lean meal. Cheap, too!

This interview has been edited for length and clarity.