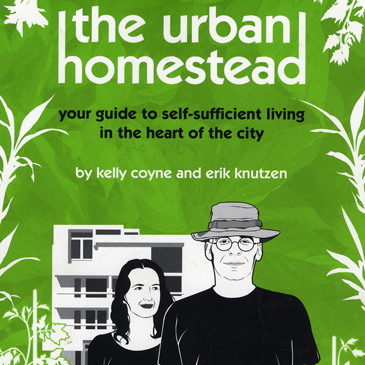 What kind of HOMEGROWN are you?
Dirt Under My Fingernails City Slicker

A bit about me:
We are the authors of The Urban Homestead and run the blog homegrownevolution.com. We live in a small bungalow in Los Angeles with a dog and four hens.

Latest greatest meal cooked at home:
Anything from the garden.

Currently listening to:
I See Hawks in LA

Making the Shed Great Yet Again

Here’s a picture from May of 1999 showing our late doberman Spike guarding me while I worked on our then 90 now 100 year old shed. Guess what I’m doing over 20 years later? Working on the same shed. The shed has gone through two previous improvement battles starting with shoving a foundation under it, […]

Heal the soil. Heal our communities. Heal the world. What: A talk by ecological wizard Nance Klehm PLUS an optional vermicomposting workshop Where: St. John’s Cathedral,  Los Angeles –514 W. Adams Blvd When: Sunday March 8, 2020 12:30 PM Nance Klehm (socialecologies.net, spontaneousvegetation.net) is a an ecological systems designer who has worked to heal degraded […]

What We Lose by Hiring Someone to Pick Up Our Avocados for Us Guy Causes Google Maps “Traffic Jams” By Carrying 99 Cell Phones Why Amazon’s Ring and facial recognition technology are a clear and present danger to society Vienna’s Cultural Approach to Going Car-Free Cat snoring through an echo microphone of the day. pic.twitter.com/Rkic9X0u6k […]

The Rat of the Land

I finally got around to setting up my Critter Cam again and, unsurprisingly, it revealed the presence of rats in and around our chicken coop. I lock up the chicken food at night but the coop still seems to be a hot spot for rats. I’ve long had a suspicion that Los Angeles probably has […]

Saturday Linkages: Bad Ideas and a Few Good Ones

EPA re-approves key Roundup chemical Hollyhock House Archive What happened to that $100 laptop idea? Goodbye Mars One, The Fake Mission To Mars That Fooled The World The 10,000-Year Clock Is a Waste of Time The World’s Most Annoying Man Car ads are bad for our cities No Rational System Would Value Tesla at $100 […]

Cornelia said…
An honor to have you - thanks for doing what you do!

Kelly Dukarski said…
Your site is really fantastic..like candy that I just can't get enough of. Look forward to learning more. Thanks!

Kelly Dukarski said…
Thanks! I was interested in your comment regarding bringing 4H to city kids. I have been thinking about doing something similar to that where inner city kids could come to the farm as part of a summer program. They could be part of the planting, harvesting and selling of veggies (learning life skills) in addition to feeding and caring for the animals. I have a friend who works with kids in East L.A. as part of an after school program and we are trying to incorporate the concept into a package that works here in MA. Big Plans!...maybe too big. And yes, hippie attire is mandatory

Aliza Ess said…
Just purchased your book along with Scott Kellogg's "Toolbox for Sustainable City Living." As a resident of Baltimore City, they're right down my alley! Can't wait to read.