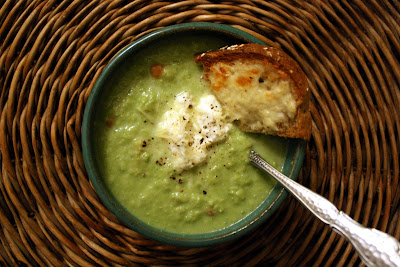 This was intended to be a legit Sunday Soup.  Two Sundays ago we ended up having a late lunch of gigantic burritos while we tackled our office/computer/sewing/junk room, which is the bane of my existence.  It's been a black hole of all the crap we don't want to look at on a daily basis and frankly, it had gotten out of hand.  Considering our space here is fairly limited, we decided to lock ourselves in the room and do some serious weeding through, recycling, donating, throwing out and cleaning so that we can reclaim the precious few square feet.  End result being an emergency burrito run that kept us full well past Sunday Soup hour.  So it was Tuesday Soup instead.  And then yesterday, we actually did make another soup but it was just a variation on this one and didn't warrant an entire post.  But for the record, we added mushrooms and bell pepper and a dash of red pepper flakes.  And here is the soup that we intended to make on a Sunday but made on a Tuesday instead.  And the world keeps goin' round. 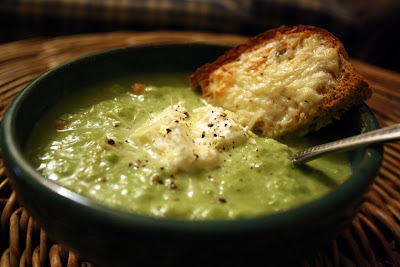 This only made about 4 servings, so double it if you are having guests over.  I haven't had split pea soup in a very long while, so I can't testify as to how different a fresh pea soup is.  It certainly has a more radioactive color to it.  And it was very good.  Flavorful but not overwhelming and on the quicker end of soup recipes. Sister got me the book for my birthday and it has the most gorgeous pictures in it. We double-teamed this meal:  I chopped up the veggies in the morning before I went to work and my co-chef did the rest when he got home from work.  I made the Parmesan Cheese Squares because they are not universally appreciated in this household due to one of the primary ingredients being mayo.  Which yes, I get the reluctance, but they are really very delicious and a super easy snack to whip up for an evening of tv- or movie-watching.  Plan for at least one slice of bread per person.

I am a new member to this site and I just saw this soup.  It looks great. I am going to make it this weekend.  Thanks for the posting.

Comment by Susan Himmel on January 15, 2011 at 12:14pm
I love pea soup and this recipe sounds delicious. I can't wait to try it. Thanks for sharing it. The parmesan cheese squares are the perfect complement. We had them this week with creamy tomato soup. I love soup season!