The Queen Bee is back home.

On Monday, I went into the hive to check on progress and make some adjustments to the comb bars. As usual in a natural comb hive—at least, I believe it is usual because it always happens to me—a few combs broke off in the process. Honey spilled everywhere. Several combs were pure honey, so I placed them on the already prepped harvest platter. Two had some brood and pollen on them, so, when I was finished, I laid them back in the hive across the top of the last box. I know, probably a bad idea, but I didn’t want to lose brood, so…I put the hive back together, tidied up, placed various honey coated tools near the hive for bee cleaning and didn’t think too much about the clump of bees on the bench, right in the middle of the honey spill.

Tuesday afternoon, Mark pointed out a clump of bees hanging from the bottom of the bench. Hmmm, I thought, that’s a bit weird. I looked in my bee keeping books. Nothing. That’s no surprise. There is lots of writing on how to build a langstrom hive in the bee books and often cute recipes for honey, like finding something to do with the stuff is difficult, but never anything on Bee Weirdness. And I have a lot of Bee Weirdness.  Bees are the weirdest thing I have ever tried to figure out—and I teach ninth grade boys.

On Wednesday, I tilted the bench board on its side to see if the bees would move. Nope. Even in the rain, they stayed put. A few came and went, several performed Bee Dances, there was considerable negotiation for prime position, but no movement towards the hive. We had several visitors that day and they all stood watching the Bee Clump. It was transfixing. And weird. Tomorrow, I thought, weather permitting, I’m moving them back into the hive. I installed the bees a few months ago; I could use the same spray and dump technique to pop them back in.

Come Thursday, it was raining again. Downpours followed by warm sun that brought all of the hive bees out at once. Not good weather for Bee Popping. Once again, I turned the board to see what would happen. When the bees spread out, I saw Her. Long, slender, yes, elegant…the Queen Bee. Outside. On the board. Heading down into the honey soaked crack.  Time for action.

Using a clear glass bowl, I captured a group of the bees and slid them slowly away from the crack. Yes. She was still in there, being, as Mark said “dogpiled” by the other bees. I slid a piece of stiff paper under the bowl. The rest of the group flew about my head. Quickly, I opened the hive and dumped the bowled bees in. Looking around, surrounded by confused insects whose home had been invaded twice in one week, I glanced down. Dang. There was a large bee on the ground. Queen? Drone? Did it matter? I scooped it up on a leaf and popped her in. The roof went back on. The hive bees settled down. They really are very tolerant.  The board bees clumped together again, but, in a few moments, were flying around, acting confused. Wasn’t there a Queen here, just a little while ago? Where is she? Did we lose her?  We went in for dinner. When we came out afterwards, all of the bees were home once again. 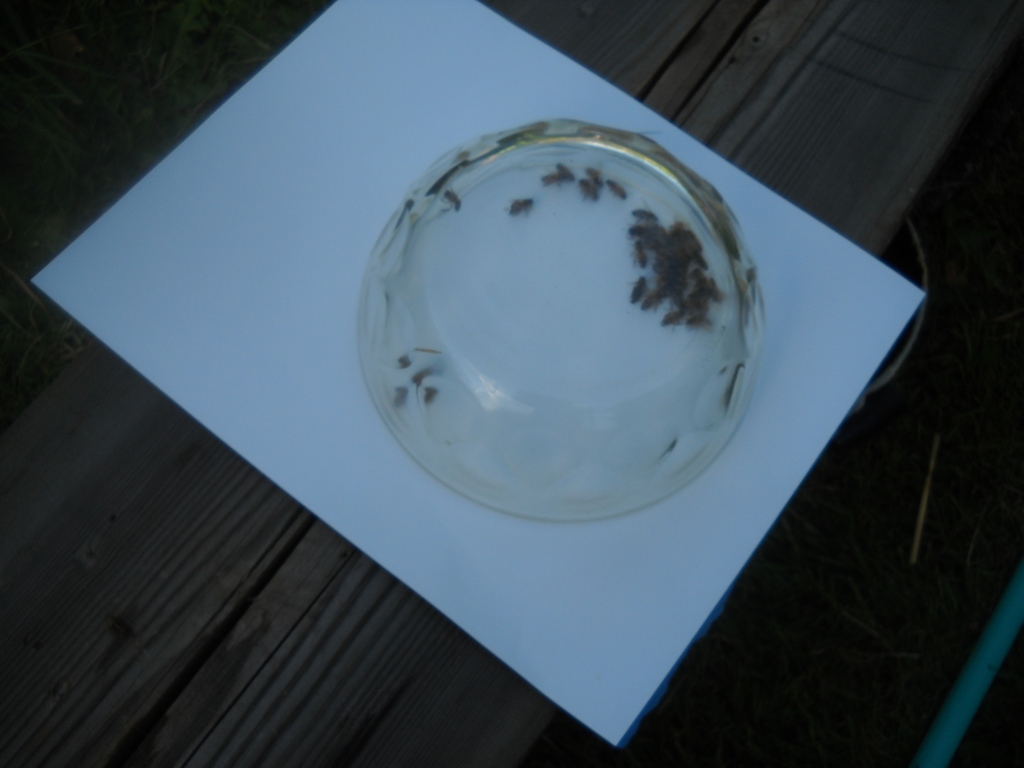