Growing Something Different and Tasty

Several years ago, I saw a blurb in a seed catalog (I think it was Seeds of Change) for sesame seeds. Not being familiar with how they grow but loving them on everything from salads to bread, I ordered a packet of seeds. I sprouted the seed in a seed pack and transplanted them to my mostly compost and sand garden. They grew nicely for a couple of months and then the most wondrous thing happened; they started to flower. Beautiful little white bells began to appear and continued adding new ones as the stalk got taller and taller like a hollyhock or a foxglove. Later in summer the flowers turned to pods and then they started turning brown. Finally I opened one of the pods and there in neat little rows were sesame seeds. There were about 8 rows of seeds in each pod and each plant may have 10-12 pods so there are quite a few seeds generated by each plant. In summary, it was really nice to have a beautiful plant with beautiful flowers that generated such a tasty result. 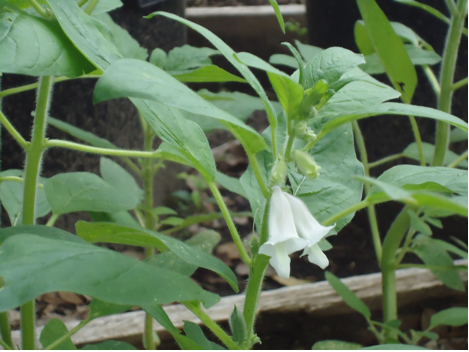 Sesame (Sesamum indicum) has been grown for over 4000 years and is grown in many areas of the world primarily for its oil which is more stable than many other vegetable oils. The seeds also have a higher percentage of protein than other seeds.

Sesame needs well-drained and fertile soil, without too much nitrogen added. Sesame can be direct-seeded after all danger of frost is past and must be planted shallow, preferably 1/2" deep, just after a rain, or if the soil has been irrigated to slightly damp. Germination is 1-2 weeks, and they mature in 80-125 days on average. (Sesame is indeterminate so maturity is spread over time.) This seed will tolerate dry conditions once the seedlings are well established. Sesame typically grows 2-4 feet tall but can get taller. The hairy, single stem needs space so plant seedlings in rows 2-3 feet apart. Sesame flowers are white before becoming seed capsules with 8 rows of seeds in each 1 to 1-1/2 inch fibrous seed capsule. The seeds are tiny, flat and pointed, averaging 15,000 seeds per pound.

Americans are most familiar with the white sesame found on bread and in the spice and herb section of the grocery store. However, there is also black sesame which is popular in Asian cuisine. Only a small percentage of sesame seed worldwide is grown in the US, primarily in Texas.  Unfortunately, planting seeds are rarely available as most of the commercial production is controlled with proprietary seed to contract growers. Occasionally small samples of imported seed are available in seed catalogs such as the ones I found at Seeds of Change. They have not carried sesame seeds since that time. I found a small quantity of black sesame seeds in a catalog last year but did not have my garden in good enough shape to plant them. They will be in the ground next spring however. There are a number of reports of people successfully growing sesame from culinary seeds. I would suspect that seeds from a natural food store or an imported food store might be a better choice than seeds from a bottle.

Growing the sesame plants was an interesting experience providing a beautiful plant plus a savory seed at the end of the growing season. Consider trying sesame for something a little different.

Bob (and anyone else!): Please keep us posted if you find a good source for sesame seeds for cultivation. And just curious: What will you do with your sesame once you've got it?