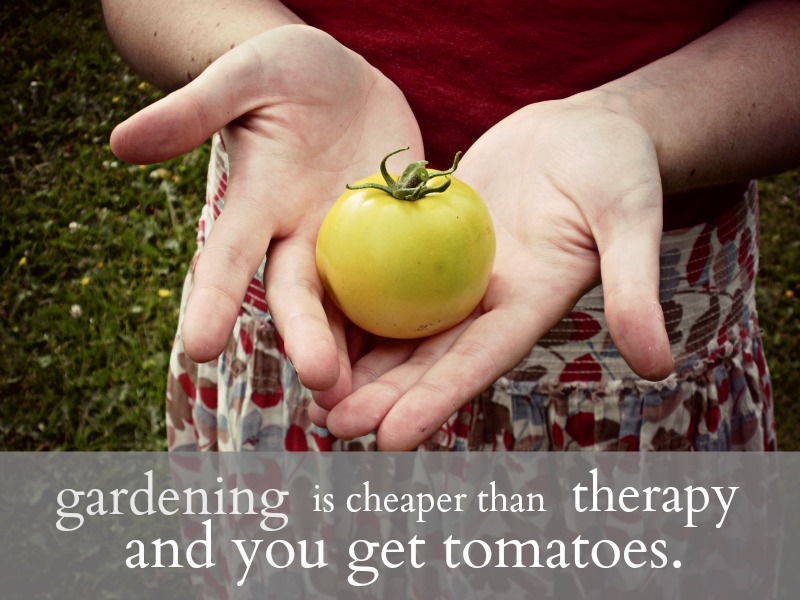 Pursuing hobbies and passions is therapeutic. Even at the beginning, when you're discovering that you love to do something, your thoughts and actions are elevated. You find a rare form of focus when you're feverishly chasing after new skills and finished projects.

I've read of blogging as therapy, writing as therapy, and exercise as therapy. Anything that you choose to do because you love it feeds your soul. Or your brain. Or whatever mysterious part of you digs certain things and pursuits. Something is sparked and it draws the energy away from your internal sadness, grief or anger. ​

"Time flies when you're having fun," but seriously - I question whether it exists at all when I'm hands-deep in dirt. I initially pursued gardening as a way of becoming more self-sufficient. I wanted to grow my own herbs and vegetables and learn the process of that growth. I approached it empirically. Within the first few weeks of gardening, I understood that there was a much larger process taking place and it was sneakily working its magic inside me (who knew planting seeds was so figuratively powerful).​

Even though there are some rather un-glamorous, not-fun sides to gardening (picking off bugs, still gross) (watering the garden, still boring), the experience of planting, tending and harvesting has enriched my life this summer in a way I never expected. ​

This past week, I replanted some cold-weather crops like kohlrabi, beets and spinach. As I was fluffing up the soil in preparation of planting, I had a flash of thought - it's going to snow soon and I won't be able to come out to the backyard and play with my plants. I won't be able to run away from the bees and wasps that have claimed my cucumber blossoms as their territory. I won't be able to swat away the beautiful little white butterfly moth thing that is actually the patriarchal (or matriarchal?) culprit behind cabbage worms.​

Stress! Fear! These things creep in when I think about "losing" a hobby that's fulfilled me for the past few months. ​

But, a part of growing up and into yourself is recognizing that change is natural. There is nothing more uncontrollable than summer ending and the chill of winter creeping in.​

That doesn't mean I have to go all crazy. Gardening was only one of my therapies this summer. I'm still a diehard fan of reading, knitting, and good TV. I write all day long (it seems) and never get tired of it. Winter months are a perfect season for pursuing hobbies and passions easily-performed from the couch or kitchen table. ​

If there's ever a time to settle and learn, it's while the snow flies. Gardening therapy might be coming to an end this year, but the doc's always in. Instead of planting a row, I'll knit one, and it all works just the same.​

​WHAT HOBBIES OR PASSIONS DO YOU TEND TO PURSUE ONCE THE SNOW FLIES?

Hooray! Thanks for sharing this, Jenna! And I totally agree: Time stops (as do most pesky negative thoughts) when you're doing something you love. It's gardening during the summer for me, too—and then it becomes screen printing in the winter and early spring. There's just something about a darkroom that seems seasonally appropriate. And I end up with something tangible. Sort of like gardening, actually.

Awesome, Jenna. Looking to get back into the craft/sewing room and/or curling up with a good book!