Can I grow a vegetable garden in SW Florida? 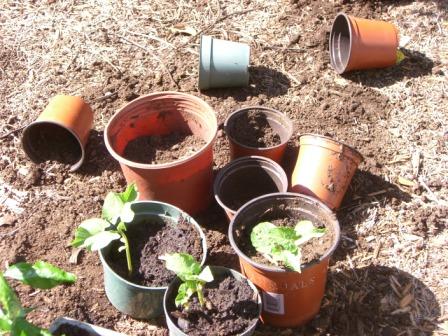 I guess I have set myself up for failure one more time. This week I was very productive planning, gathering, building, and even putting seeds into earth. I have sewn parsley (grown mostly for the butterflies), beans (I love home grown string beans), endive and a mixture of lettuce.

Many friends, neighbors, long time residence have warned me “You can’t grow a vegetable garden in Southwest Florida.” This year will be my third attempt. At the moment it feels like the third time is not a charm but instead the third time is time to give up.

I have learned you need to start a vegetable garden in early Fall. That is basically the only new ingredient I have added this year. Last year I tried container growing which was only a so-so success. The soil dries out so quickly in the containers that the plants never became healthy thriving vegetable producing lush plants.

My biggest difficulty of growing vegetables in Southwest Florida starts with the soil. That is why I thought container gardening would work best. If I had lots of bucks to build a large off the ground planter box with a drip irrigation line, then container gardening may be the answer to poor soil. I don’t have the money and I have an even bigger problem then soil made up of sand and shell, my larger problem is my husband who has listened to all our friends and neighbors and tells me, “no, you may not attempt to grow vegetables in our back yard.” It is pretty tough to hide both financially and materially a 10X12 plot of fenced in land. Well neither the soil nor my husband has stopped my third year attempt of growing my own vegetables.


I have spent a month trying to decide how to actually go about growing my garden this year. I have the perfect spot where I have had great success growing flowers. It is a box about 12 feet by six feet which I have filled with lots of yummy soil. The box is in a great location where it gets sun but not all day and not to intense. It is the right size. It is easy to water. It is perfect but I can’t grow my food in a box made from creosote boards. This box is made out of old railroad ties. I almost chose to build another box two feet off the ground above the creosote box. Then I decided I would miss my zinnias too much. So I cleaned the weeds and plant my zinnias. Anyways my husband passes by this box daily when he parks his car.

I have chosen once again the lazy mans cheap version of a garden in Florida. It works everywhere else in the world. Even right here in Sarasota County I have seen successful backyard garden. But my soil is the absolute worst soil you can try to grow in. I live at the edge of mangroves. I plan to fence in an area and throw piles of soil on top of the ground.

My containers garden was somewhat success with eggplant, basil, parsley, and tomatoes. My husband didn’t think I was successful at all. He just doesn’t get it. To me picking one tomato from my own plant is success. The few I did pick were sweet, small but delicious. He called them $4 tomatoes. He really wishes I would not attempt to plant another vegetable plant ever, anywhere, again.

I have this other area, a little smaller than my railroad tie box. But this area also has the right light which is very important in Florida. My lazy man idea is to make a box on top of the ground and fill it with compost soil. I am being lazy because I know if I would build a platform off the ground and build boxes on the platform I would be better off. My idea for the time being is to use the ground like a bottom of a box. I am not going to dig into the ground but place compost rich soil on top of the ground and plant in it.

I just might be successful with this means of growing my vegetable garden. Last week I went to a community garden and they had a super garden growing with this same concept. That garden made my craving to get planting explode. They had ever vegetable plant you can think of growing and looking beautiful right here in Southwest Florida. There was lettuce, beans, tomatoes, onions, broccoli, peas, and much more.

So as of two days ago I started some seeds. I thought I will get the seeds going this week. Build my garden area next week and buy a few plants from the farmers market the week after. I got really excited about getting started. I laid out the 8x8 plot tucking my containers of just planted seeds in the middle of this area. They looked great yesterday.

I could not believe it this morning when I went to water and the six small pots I planted parsley seeds in were strewn all over the place. Some of them were upside down with not a bit of soil left in them. Others were on their side half way dumped out. Can you believe it two days into this and I am failing once again. I take it a raccoon must have thought there was something to eat in these little pots. I hope he ate mouthfuls of dirt and got retched sick and never comes back.

Oh that reminds me a friend this week told me they are going to try cayenne powder on the edges of their planters to keep the raccoons away. I had lots of questions like how long does the cayenne stay potent, and how much would you use and wouldn’t it be costly to keep putting it out. She explained the hope is that the raccoons would sniff the cayenne a couple times and have a bad experience that they would stop checking it out. Her worry was that one night one group of raccoons may check out her yard learn a lesson but two nights later another group comes, and another group and another group and yes you would have to be constantly putting the cayenne out.

I scooped the scattered dirt and filled the pots back up hoping that some of the parsley will sprout anyways. On a bright note my lettuce seedlings have appeared already. It looks as if every seed I planted has sprouted. It would be wonderful if I could grow my own lettuce. Now I need to go build my fence to hopefully not only keep the raccoons out but the bunnies that I never see signs of but I am sure will be right here as soon as the lettuce gets a couple inches high.

Comment by Dayna Barnes on April 17, 2010 at 1:40pm
I'm in the same county, and I've had some limited success with a homemade version of an EarthBox. Tomatoes have done best (too wet for peppers). And rosemary LOVES it here. Don't give up!!!