This 101 comes from HOMEGROWN’s flock tender and resident tamal fiend, Jennifer. Got a favorite filling of your own? Shoot her a note and let her know.

Full disclosure: I'm a German-French-Scottish-Irish mutt who wanted to make tamales for the holidays—a traditional activity among families of Hispanic descent in my home state of Texas. In other words, I'm no expert. And yet, while the following 101 is not based on a recipe passed down from generation to generation, it is proof that, if I, an inexperienced husker, can make tamales, anyone can make tamales.

For those unfamiliar with the humble tamal, 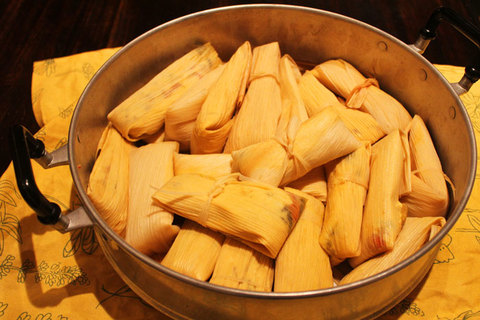 I’m sorry to say you’ve been missing out. We’ll fix that. (And yep, a single specimen is a “tamal”; the “e” gets added to pluralize “tamales.” Grammar lesson of the day.)

A tamal is something of a cross between an empanada and an enchilada: a handheld street-food snack composed of a filling (exhibit A: spicy pork) inside a pocket of decadently soft and moist corn meal called masa, which is in turn surrounded by a corn husk. You unwrap the tamal from the husk before eating; the husk acts as an insulation blanket and flavor conduit while the tamales steam. You can read more about the history, culture, and preparation of tamales in this recent article from the New York Times.

Because we had invited friends over to help assemble our tamales—a get-together known as a tamalada—and because one of those friends is a vegetarian, we prepared two kinds of filling: veggie-friendly roasted peppers with cheese and a not at all veggie-friendly but deliciously spicy pork. These innards were fine sitting in the fridge until the next day. We also soaked the dried corn husks—available from Latin American groceries and, sometimes, from Whole Foods—overnight.

Crossing off these tasks ahead of time was key, since it decreased the number of day-of activities: preparing the masa, assembling the tamales, steaming the tamales, and eating the tamales, repeating all steps as needed. Ah, tamales. Delicious, fragrant, corn-infused tamales. Is that my stomach growling? Let’s get started. (Visual types can find a slideshow down below illustrating many of the steps.) 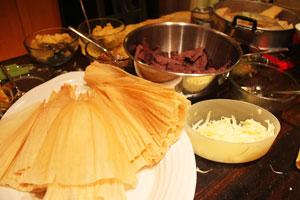 Immerse the stack of corn husks in warm water, using a plate or bowl to hold them below water level, if needed. Husks should soak at least 30 minutes, but three hours to overnight is ideal.

FOR THE SPICY PORK FILLING (MAKES AT LEAST 2 DOZEN TAMALES)

For the pork filling, I used this recipe from Cooking Light magazine as my jumping-off point, although I doubled the amounts below, making enough filling for approximately 56 pork tamales. What? I like to eat. 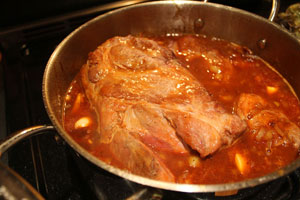 » 1 7-oz can chipotle chilies, with sauce (Caution: The sauce is spicy! Daintier palates should add the chilies but hold the sauce.)

» 1 tsp vanilla (The recipe called for baking chocolate, which I didn’t have on hand and wasn’t willing to fork over $6 for, so I doubled the amount of coffee, substituting stronger-flavored espresso, and added vanilla.)

Bring a Dutch oven to medium-high heat. Add oil. Season pork evenly with ½ tsp salt. Add pork to pan and sauté 10 minutes, turning to brown on all sides. Remove from pan. Add onion and garlic to pan, sautéing 3 minutes and stirring occasionally. Stir in cumin, letting seeds touch pan directly so they toast a bit, and chipotle chilies; sauté 1 minute. Stir in stock and the next 3 ingredients; bring to a boil.

Return pork to pan, cover, and bake at 300 for 3 hours. (Note: Because I made 6 lbs of pork butt, I ended up baking a total of 4 hours.) Remove from pan and let stand 10 minutes. Shred pork with a fork. Return pork to sauce. Refrigerate until 30 minutes before you’re ready to assemble the tamales.

FOR THE ROASTED PEPPER FILLING (MAKES AT LEAST 1 DOZEN TAMALES)

I used a recipe from my buddy—in my mind, at least—Mark Bittman’s How to Cook Everything Vegetarian as my guide, with a few adjustments. I also tripled the amounts below, making enough filling for at least 36 tamales. » 3 medium bell peppers; roasted, peeled, and sliced (I used a combo of green and red for the holidays.)

» salt and pepper to taste

Bring a large skillet (you’ll eventually need a tight fitting lid, so choose your pan wisely) to medium-high heat then add the oil. Add the onions and cook, stirring frequently, until they begin to color, about 5 minutes. If you’ve doubled—or, ahem, tripled the recipe—and are crowding the pan, this will take at least twice as long. Stir in the sugar, reduce the heat to medium, and stir as you cook 5 minutes more. Add salt and pepper, cover, reduce heat to low, and cook 15 minutes more. Add roasted peppers to pan, stir, cook 10 minutes more. Turn off the heat, uncover and bring to room temperature, then refrigerate until 30 minutes before you’re ready to assemble the tamales.

FOR THE MASA (MAKES AT LEAST 1 DOZEN TAMALES)

Fast forward one day. You’ll want to make the masa right before you use it, so wait until your workers—er, guests—arrive and are helping themselves to a beer before you begin. This recipe makes enough masa for about 1 dozen tamales, so you’ll want to scale the amounts of masa ingredients to match your fillings. That said, unless you’ve got an industrial-sized food processor, you’ll probably want to work in 1-dozen batches of masa. » ½ cup olive oil, put in the freezer 1 hour or more beforehand (a healthier-ish alternative to lard)

» 2 cups masa harina (Maseca seems to be the most common, available at Latin American markets, larger groceries, and online)

Put your Maseca in the food processor, turn on the machine, and add stock ¼ cup at a time until a thick paste forms. Add the frozen olive oil, baking power, and a pinch of salt. Pulse a few times, then, with the machine running, add more stock ¼ cup at a time until the consistency reaches that of a thick batter. Don’t worry: You’ll be able to see the point when the masa goes from crumbly to battery. 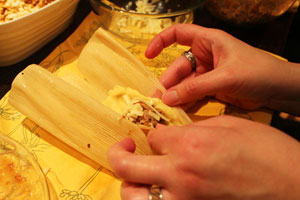 » a large steamer (dumpling, veggie, or other)
WHAT TO DO

Now comes the fun-slash-messy part. Got a beer handy? Good. A cold can will help rinse those sticky fingers between tamales.

Remove the well-soaked corn husks from their bowl and stack them within arm’s length of your work area. You’ll also need your filling/s and your masa nearby. Since we had a tamal task force pitching in, we split the filling and the masa into smaller bowls, with easy-to-reach stations set up around the dining table.

Take a damp husk and spread it out before you, narrow end closest to you. Dollop 2 Tbsp of masa in the center of the husk, then pat the masa into a roughly 4- x 3-inch rectangle, leaving a couple of inches of husk uncovered on all four sides. 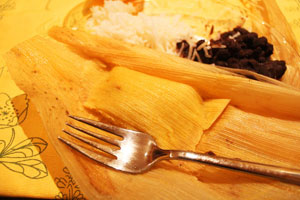 overload. (Seriously. It’ll only make your life harder.) Fold the husk in half lengthwise, sort of like a taco, so that the two longer sides of the masa meet. Pinch the husk so that those seams of masa inside come together, essentially sealing up the masa. Do the same at the top and the bottom. Now, roll those corn husk flaps closed tightly, so that you have a tidy bundle. If you’re lazy, like me, you can then fold the top and the bottom of the husk under. If you care about looks or want to make sure your tamales stay nice and tight, you can tear another husk into long skinny strips and use those to belt your tamales closed. (A quick note here: The process is really forgiving. An ugly tamal is still a delicious tamal, so don’t sweat it.)

Cover the bottom of your steamer rack with flat, damp husks then load up the basket with your rolled tamales. Place the rack in the steamer, ideally about 2 inches above gently boiling water. Cover and steam about 45 minutes. Remove from steamer, let cool a smidge, unwrap, top with salsa or crema or just eat plain, letting that corn huskiness come through.

We made three or four batches as a group, sampling the fruits of our labor while the next batch steamed, and ended up with enough left over to send everyone home with a baggie. (Bonus: Tamales freeze well.) Tamales might not be a tradition in my clan, but since I live 2,000 miles away from my family, making tamales with friends was an awfully nice way to ingratiate myself into a surrogate family—and just might become an annual endeavor. Holy tamal, indeed, and happy holidays, y'all.

SEE THE PROCESS IN ACTION

To see the photo captions, mouse over the slideshow and click on the "i" that pops up near the bottom right corner.

Got a tamal-folding technique to share? Post it below and keep the conversation rolling. You might also be interested in 101s on making your own tortillas and drying chili peppers, and you can always find more things to cook, preserve, make, craft, plant, grow, and steam in the HOMEGROWN 101 library.