This 101, on apple molasses, comes from HOMEGROWN member Jackie. Jackie raises old-fashioned American Milking Devon Cattle and heritage breed pigs on western Pennsylvania’s Auburn Meadow Farm. You can follow her adventures in the kitchen and the pasture on her blog, and check HOMEGROWN soon for a 101 from Jackie on making fruit caramels. (How’s that for wetting your whistle?) Thanks so much, Jackie, and please keep the good ideas simmering! 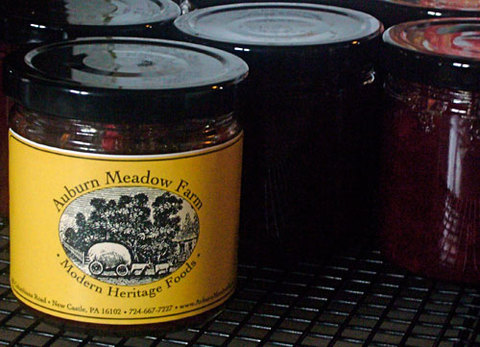 Old-time New Englanders called it apple molasses, apple cider jelly, or apple cider syrup. But apple molasses isn’t just a quaint novelty. It’s an affordable pantry workhorse along the lines of honey or maple syrup, and it’s a great alternative to refined sugar when you want a natural and affordable sweetener.

Even sweeter, you can create it easily in your own kitchen, without stinging bees or maple sugaring. The Slow Foods Ark of Taste has the good sense to remember boiled cider and cider jelly on their list of endangered foods worth preserving. Visit their site for a brief and entertaining history and for links to the few commercial producers still selling this bit of our culinary past.

The reason I’m more than a little excited about apple molasses is that, in my quest to use ingredients from home, one of the biggest stumbling blocks has been sweeteners. Store-bought sweeteners are often made from exotic ingredients, rely on unsustainable farming practices or corporate sources, or require unattainable at-home kitchen procedures. But guess what I have plenty of, here in western Pennsylvania? Apples! In all shapes and sizes! And guess what I’m completely capable of doing all by myself, with equipment already in my kitchen? Yep: boiling and spooning into jars.

This is so simple, I can’t even truly call it a recipe. It’s also adjustable, depending on your personal preference and how you plan to end up using the end result. I wanted to bake with mine, so I wanted it thick, like traditional molasses. If you prefer, you can leave it thinner to use as a syrup, a concentrate for apple-y sparkling sodas, or a secret weapon to boost your apple pies into legendary status.

How long will it take? Plan to make boiled cider on a day you’re going to be home for four to five hours. It doesn’t require much attention for most of that time, but you do need to check on it regularly to prevent scorching.

As for yield, 2 gallons of cider will yield 4 to 5 cups of molasses, depending on your preferred thickness. One gallon will yield 2 1/2 cups. To estimate smaller batches, expect 1/4 cup of finished syrup for every 2 cups of cider.

» 1 to 2 gallons of apple cider, preferably small-batch, local, and made from a mixture of both sweet and tart varieties, with no preservatives added

» sterilized jar and lid for storing

Pour the cider into your pot. Do not overfill. As your cider heats, it will expand.

The goal is to reduce your cider to between 1/7 and 1/10 of its original volume, depending on whether you want a liquid syrup or a more molasses-y consistency, like mine. This amount of reduction assures a shelf-stable product. A tip: One gallon yields about 2 1/2 cups of finished syrup. When pouring the cider into the pot, first measure in 2 1/2 cups to gauge what the finished amount should look like. This will help you later.

I have a fairly large stainless stockpot, so I do two gallons 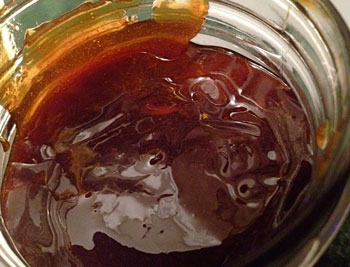 at a time of fresh cider from a nearby orchard. If your pot isn’t so large, I’d recommend sticking with one gallon or less, at least the first time. The cider does have a way of foaming up and doubling in size, and boiling over makes a pretty nasty mess.

Take it slow, first bringing the cider to a boil over medium-high heat then reducing the heat to medium-low and allowing it to simmer uncovered for several hours. The more you try to do at once, the longer the process takes. It doesn’t require much supervision, but you should be around to give it a stir and a skim regularly. The end of the simmer requires your full attention and frequent stirring to prevent scorching. Your cider is done when it coats the back of a spoon and has a consistency like maple syrup.

While the cider is boiling, prepare a sterilized jar. Use a sturdy, unchipped jar suited for preserving, such as a Ball jar, and a fresh two-piece lid set. I like wide-mouth jars, since they make it easier to spoon out what you need later. Wash your jar in hot, soapy water and rinse well. Dry and place your jar in a towel-lined baking pan. Put the pan into an oven preheated to 220 degrees F for at least ten minutes. Your jar should be warm and completely dry before filling.

Pour your cider into your prepared jar and seal. I don’t make this in a quantity large to require waterbath canning. It lasts longer in the refrigerator than you’ll ever need.

If, however, you’d like to preserve larger batches, check out the National Center for Home Food Preservation’s instructions for waterbath canning and process for 15 minutes. Store your sealed jars in a cool, dark place for six months or more.

HOW TO USE YOUR APPLE MOLASSES Not sure what to do with boiled cider once you’ve made it? Use it in a big pot of beans, in your tea, or as a flavor booster for pies, candies, apple sauce, and preserves. Pour over pancakes or waffles; schmear on buttered toast or cornbread; drizzle on pudding, cake, or ice cream—pretty much any way you’d use honey, molasses, or maple syrup*. It’s also delicious on a peanut butter sandwich. (Psst: In case you haven’t heard, grilled peanut butter sandwiches are pure genius.)

On the savory side, boiled cider pairs perfectly with cheeses; makes wonderful vinaigrette; and, mixed with whole grain mustard, makes a memorable glaze for meats and vegetables. I’ll be adding it to this year’s onion marmalade, and this recipe for bacon jam has left me a little speechless.

Helen Rosner of Saveur magazine has said that her favorite way to use her molasses is “simply to stir a tablespoon or two into a mug of boiled water for a cider tea that beats regular hot cider for both nuance and depth.”

A simple way to add some local deliciousness to your day, don’t you think? You can also package it into jars or bottles for an inexpensive, useful, and unique handmade holiday gift that money can’t easily buy.

*Apple molasses tends to be heavy, and its viscosity varies. Be careful when substituting in baked goods, as it can make your results heavier and more dense than commercial honey or syrup.

Got a question for Jackie? Or another use for homemade apple molasses? Post it below and keep the conversation rolling. You might also be interested in 101s on maple tapping and maple syrup making, an elderberry syrup flu fighter, homemade extracts, small-batch canning, and for apple growers or those who would like to be, how to espalier a fruit tree. You can always find more things to cook, preserve, plant, grow, make, craft, and boil in the HOMEGROWN 101 library.

This looks great!  I think I will try it.

Added sugar isn't required?  Optional depending on product?  I'm curious, cause some of the Mennonite ciders around here don't strike me as being very sweet.

Woops! Sorry Anne to be slow in replying to your comment. Not much desk time at the moment!

No additional ingredients are required - the cider has plenty of sugar.  Without experience, I can't really comment on your Mennonite ciders - my local ciders are perfect for molasses. It is best if your cider is made from a mixture of varieties, but hey, perfection is the enemy of the good sometimes. At the moment, I don't have the luxury of being too picky about the apple mix in my orchard-bought cider.

Some people also add spices, which I pass on. I don't like my staples to be limited by being specifically spiced. I can add seasonings later to the finished dish. If you do want to explore added spices, add at the end. The reduction will intensify the flavor and what was delicious at the beginning can be overpowering at the end.

Good tip :)  Thanks!  I'm still hunting for preservative-free Apple cider.  I might have to take a trip out to St. Jacob's!

does your cider contain alcohol or is it more like an apple juice?  My husband makes cider but it contains mega amounts of alcohol as does most cider in europe.

Hi, Helen. I *think* Jackie uses nonalcoholic cider for her molasses (not to mention her apple cider caramels!), but now you've got me wondering whether this would work with boozy cider and if/how the recipe would need to be tweaked. Has anyone tried something similar?

A question... and maybe I've missed it. I apologize in advance.  How do you make your apple cider? This molasses recipe sounds heavenly.

Regarding alcoholic cider: you definitely have to use "fresh," non-alcoholic cider. Virtually all of the sugar in the juice is converted to alcohol by fermenting it, so you wouldn't have anything like molasses if you boiled alcoholic cider down. Best use for alcoholic cider, assuming it doesn't taste like a fine white wine, is apple cider vinegar. You can get mother of vinegar online or at almost any wine-supply store. We find that folks around us would much rather have fresh, organic apple cider vinegar than hard cider any day.

Hi, Helen. I *think* Jackie uses nonalcoholic cider for her molasses (not to mention her apple cider caramels!), but now you've got me wondering whether this would work with boozy cider and if/how the recipe would need to be tweaked. Has anyone tried something similar?

Husband makes loads of alcoholic cider every year, not like fine wine just a pleasant quite potent drink - an alternative to beer.  if it doesn't work then it usually turns to cider vinegar of its own accord.  I just wanted to be sure what to use for the molasses as Cider in Europe is very definitely alcoholic, obviously not so in the US.

You are certainly right about the "pleasant but potent drink." We squeeze about 50 gallons [oops! Maybe around 200 liters] of fresh apple juice every year. Whether this is truly "cider" is still the su